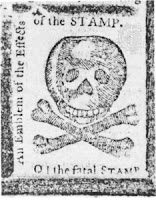 The Stamp Act of 1765
AN ACT for granting and applying certain stamp duties, and other duties, in the British colonies and plantations in America, towards further defraying the expenses of defending, protecting, and securing the same; and for amending such parts of the several acts of parliament relating to the trade and revenues of the said colonies and plantations, as direct the manner of determining and recovering the penalties and forfeitures therein mentioned.

At the very last minute before social studies with the eighth graders today, I decided to change it up a bit and start out with a huge lie! I just hoped they would buy into it. So I began...

Good morning, ladies and gentlemen. Before we begin, I wanted to make sure you were aware of the new policy concerning student handouts. In order to help meet some of our expenses here at school, it has been decided that we will start charging students for each and every handout we distribute in class. Students will be charged one cent for every page they receive; so a handout that has five pages will cost you five cents. If a student loses a handout, it will cost five cents per page to replace it.

I'm sure you can imagine how high our paper costs are each month...teachers use a lot of paper! And we need to pass that cost along to the students. After all, these handouts are for your benefit anyway!

They totally bought it!

There followed the briefest moment of silence until..."WHAT!!!" And for the next thirty minutes we discussed, argued, and plotted. At one point Daniel offered up a huge hint:

This is sounding an awful lot like what happened between the colonists and the British.

I actually laughed after he said that, thinking that the jig was up and they would figure out that I'd made the whole thing up.

Some of the comments from students included:

What if we refuse to pay?


Do our parents already know?


Are we supposed to bring pennies every day?

Another reason to go paperless! (my favorite!)

And, of course, the obligatory:

One argument that came up was that families pay tuition in order for their children to go to a Catholic school and items such as handouts should be covered by that tuition. I responded, truthfully, with "Tuition doesn't cover all of the costs to run a school. It doesn't even cover teachers' salaries. Remember, we didn't get a raise last year? And it's quite likely that we won't get a raise this year."

At one point, I stopped the discussion saying, "I can't believe I've spent almost an entire class period talking about paper!" I asked them to open their books and then asked Jack to read the paragraph about the Stamp Act of 1765. I assumed, incorrectly, that this would lead my students to understand the deception I had led them into.

Instead, it led them to start plotting. "Let's have our own tea party!" "We should tar and feather them!" Luke, a temporary voice of reason, offered up an idea for a boycott. "I say we 'borrow' the handouts, write everything down on a piece of binder paper, and then give them back their paper. Then they can't charge us."

Well, we'd still be making the copies, so we would still have to charge you for them.

"Ok," Luke decided, "if a boycott won't work, then I say we take their paper and stuff the sinks and toilets with it!"

This, of course, received a rousing cheer from his frustrated classmates.

I explained to the class that this would be considered vandalism to school property. At a time when they were applying to the local Catholic high schools, did they really want to risk being turned away from the future they had planned out for themselves?

It got very quiet for a moment.

And then the complaining started again. Questions came up about how the school was spending their money. Perhaps better financial decisions needed to be made, and they had a few suggestions (some of which I even agreed with). I stopped them and asked for a show of hands of those who could understand why the school would want to raise funds this way. Nearly every student had their hand in the air. "And how many are opposed to this idea?" All but two.

I asked them to explain why they would oppose something that they seemed to understand the reasoning behind. "It isn't fair!" reared its ugly head once again, and then someone offered the perfect question:

When was this discussed? Who was there?

"Beautiful!" I thought to myself. And then I responded, "I don't think it was really discussed. The decision was made by those over there" and I pointed toward the school office.

"What do you mean, it's not right?" I asked. "Y'all said you understood the reasoning for needing to raise the money. Doesn't the school have the right to ask you to pay for expenses for your education? Why should WE have to pay for YOUR education?"

More complaining ensued and I heard Sam mention how the British had treated the colonists. We were getting close to the end of the class period, so I interrupted the conversation, stood in front of them and just smiled. It took a moment or two, but then...

Seriously...you made it all up?!

I reminded the class that, early in the discussion, Daniel had drawn the comparison between what I had told them and what had happened between the British and the colonists in the 18th century. I was rather surprised they didn't catch on at that point. A loud groan escaped my classroom! They couldn't believe it either. I went on to explain that I had put them in the position of the colonists who were frustrated with the British placing tax after tax on them without giving them a voice in Parliament.

And they got it! They really understood why the colonists could become angry at the way they were treated by the British and why they would eventually issue a Declaration. It was probably the best teaching moment of the year for me! The looks on their faces were absolutely priceless! I hope this gives them a totally different perspective on the American Revolution as we move forward in the unit.

Wait...do I have to bring pennies tomorrow or not?

Another Trip to the Library

Take four seventh grade girls, plop them in the middle of the teen section at the local library, and just listen. You're in for, at the least, a very interesting morning. Of course, if you were sitting with my students, you might just laugh yourself silly and then be absolutely amazed...all in the space of about ten seconds.

Welcome to middle school. This is no place for wimps.

I met four of my students at the library again this week, hoping to sit and talk about books for a couple of hours. The girls who showed up on Wednesday are incredible readers, so I took advantage of our time together and asked them to help me create a list of recommended books. If you're looking for something to read from the young adult genre, this is a good place to start (along with the list I provided in my previous post).

These are in no particular order:

My students are always giving me the titles of book that I just have to read. So I created a Google Spreadsheet for them to add the titles to. Some of the books they've added, that I haven't mentioned here or in my previous post:
And if you're curious as to what books my students checked out from the library on Wednesday, here's a picture I took of our table (and these aren't even all the books that were checked out): 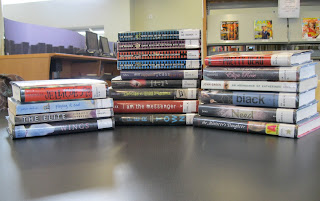 We also had three iPod Touches with us, so we discussed some of their favorite apps, including Livesketch which they were happy to demonstrate for me: 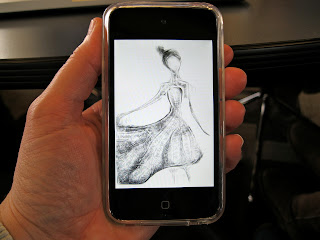 I have some amazingly talented artists in my class! That one was created by Lanvi; the following was done by Gaby: 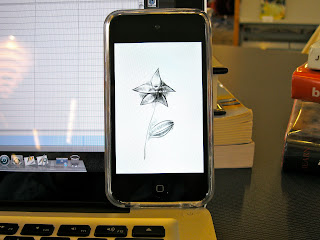 Lanvi let me try it out on her iPod, but I didn't feel the need to take a picture of my, um, "creation".


Some of the other apps we talked about:

If you need any other suggestions, I know my students will be more than happy to share their thoughts with us! Happy New Year!
at 7:44 AM 6 comments: Links to this post