We Hold These Truths... 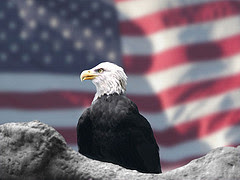 Happy Fourth of July! Like many people in our country today, I am spending time with my family. We'll be partaking of the obligatory Fourth of July BBQ later today...hamburgers, hot dogs, potato salad, and plenty of watermelon. [Quick side note: I asked my five-year-old nephew this morning how many hot dogs he could eat in one minute. Ten? Twenty? Fifty? His response: "One. Nobody should eat fast." Wise words from one so young.]
As a history teacher I feel it necessary to reflect today on the very beginnings of our country. What a remarkable thing our Founding Fathers did, creating a new country in a new fashion. They were willing to risk everything for freedom. Everything! Today I ask myself: "What would I be willing to risk for freedom? What would I give to live free?"
The Fourth of July is more than just a reason to get together with friends and family, eat, watch fireworks, and wave a flag about. It is a celebration of all that is unique about country. It is a means of reminding ourselves that we enjoy, and should be quite grateful for, freedoms that many others in this world do not have. Today I also ask myself: "What of them? What is my responsibility as one who enjoys such freedoms to those who cannot?" Surely the Founding Fathers would have wanted us to share the ideas they crafted into our Independence.
Let me be clear. I am not saying we should send our military out into the world to force independence upon every nation that does not have it. Our nation's Independence began with an idea that no one man (or woman) should hold control over a country without care or concern for the people who lived there. That idea spread by word of mouth and by the written word. It was a slower process back then. Thomas Jefferson did not have a Twitter ID (I wonder what he would have chosen for his screenname. @TJefferson? Too easy. How about @DecOfIndieWriter? Or just @DecWriter?) Thomas Paine was unable to use an iPhone to send Common Sense to the press.
But look for a moment at this amazing thing they created! And it all started with an idea. "We hold these truths to be self-evident, that all men are created equal, that they are endowed by their Creator with certain unalienable Rights, that among these are Life, Liberty and the pursuit of Happiness."
All men. All people. Everywhere on this beautiful planet, all people are "created equal" and are entitled to "Life, Liberty and the pursuit of Happiness." Why is it some in our world think they are entitled to more? That they can possess that which belongs to another by birthright? And what are our responsibilities as Americans to those in our world who do not have the freedoms we sometimes take for granted? Do we have any responsibilities to them?
I have no answers for you today. I have only questions. It's often how I teach my students...I ask more questions than I answer. I'm curious by nature; I hope to pass that along to my students.
One more question: What do you know about the holiday, Independence Day? How did it come about? I highly recommend reading this article, "The Invention of the Fourth of July" by David Waldstreicher. The first paragraph sums it up quite nicely:

"Mostly out of English material" but now uniquely American. So, wherever you are today, or this weekend, stop for a moment and ask yourself: What is freedom worth to me? 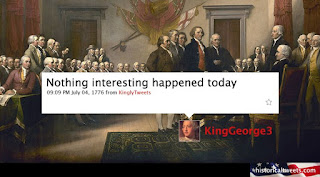 Bald eagle and flag image from: Wikimedia Commons
at 12:12 PM